Are you looking for the best ways to develop iOS apps on Windows? Ever thought about how to develop an iOS app on Windows? Is the unavailability of Macs stopping you from building iOS apps?

However, every iOS app developer knows that without using Xcode (an IDE), you cannot build or publish iOS apps. Importantly, Xcode only runs on macOS.

So, is it really possible to build iOS applications on Windows? If yes, then how? Don’t worry. To answer this, we have curated the best 5 ways to develop iOS apps using a Windows computer. Let’s get started.

How to Develop iOS Apps on Windows

Without using Xcode (an IDE), you cannot build or publish iOS apps. This is because Xcode only runs on macOS with the iOS SDK. However, if you wish to develop an iOS app on Windows, you need virtualization software.

Using a virtual machine such as VirtualBox and VMware, you get access to virtual Mac OS. This makes it possible for you to develop iOS apps on a Windows machine.

With a virtual machine, you are allowed to run Windows on Linux operating systems (Linux OS) and even Windows on a Mac operating system. One of the significant benefits of virtualization software is that it helps run multiple OS side-by-side, which is beneficial to build cross-platform apps.

Now, you require 2 things to run Mac OS on a virtual machine.

Get a copy of macOS by downloading it from the App Store so that you can start the iOS development process. Also, look out for installers and search for virtual disk images with macOS pre-installed.

Here are the following steps that you need to follow:

Note: The system specs should be between 4-8 GB of RAM, an Intel i5/i7 compatible CPU, and a minimum of 10 GB free disk space. Also, while configuring macOS, enter a VALID Apple ID.

Once you install macOS and Xcode, you will have access to coding and iOS Simulator capabilities. This will allow you to build and test apps in a similar environment you expect from a real Mac computer.

Want to Create an iPhone App?

Want to validate your app idea? Want to get a free consultation?

We will also discuss 5 more ways of iOS app development using a Windows computer in the next section. Let’s check out each of them.

Apart from using virtual machines, there are other ways that you can use to build iOS apps on Windows PC. Let’s discuss all of them one by one.

This is another way, where you can rent a Mac in the cloud. MacinCloud and MacStadium are some of the providers that offer affordable rent-a-Mac products.

Generally, prices start at $20/month and you have an option to choose from various hardware options, like the brand new Mac Mini and Mac Pro. 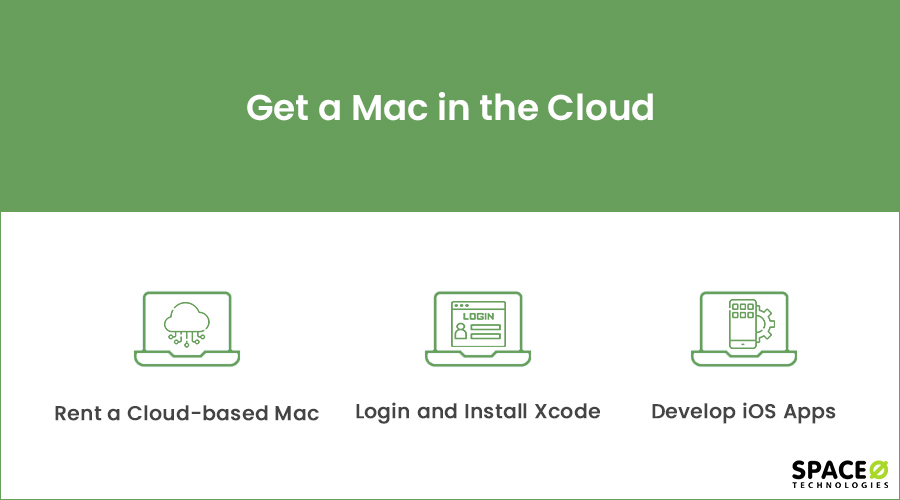 Connect with cloud-based Macs via a remote desktop connection. Windows offers a stock remote desktop client that you can use to develop apps. So, once you are signed in, install Xcode and start the iOS app development process.

Using cross-platform tools, like Xamarin and PhoneGap, you can code your apps and export them to iOS and Android. This will also cut down your app development time as well as cost in half.

The cross-platform tool ecosystem is vast for building iOS apps. By using complete integrated development environments like Xamarin with C#, you can build cross-platform applications. Other Windows-based development tools like PhoneGap and Appcelerator with HTML5 let you build native apps.

You also have the option of not choosing the proprietary closed Apple universe. You can use React Native, a cross-platform tool to write native apps with a JavaScript wrapper.

To conclude, cross-platform tools require you to know the fundamentals of programming languages, such as C#, HTML5, Swift, CSS, and JavaScript. Also, you need to understand the iOS and Android ecosystems to code native apps and hybrid apps.

Also ensure that many cross-platform tools will expect you to write platform-specific code, especially if you are looking to code custom features.

To work on iOS app development services using a Windows PC, you need to build a Hackintosh. The term “Hackintosh” has come from one of the old names of Apple computers, Macintosh with the term ‘Hack’. 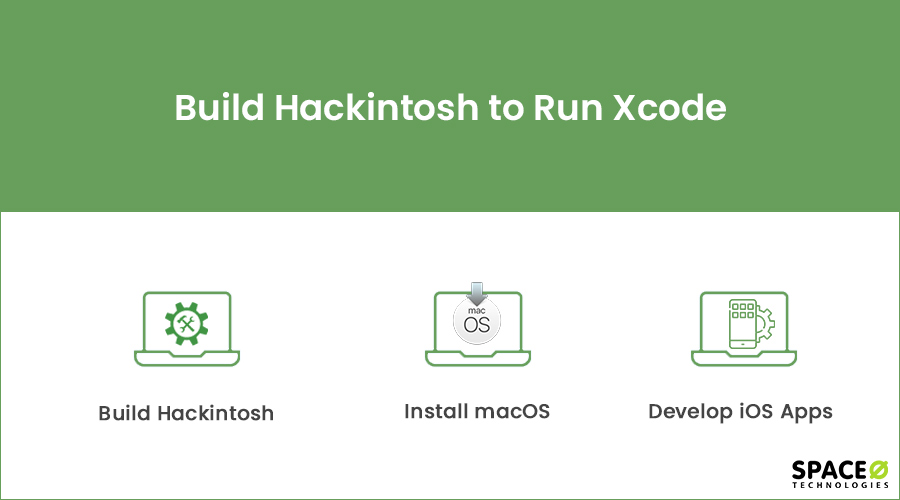 Hackintosh is a PC that helps to run Mac OS. With Hackintosh, you can install macOS as the bootable operating system on your Windows PC. You also have a choice to develop a dual-boot system that can operate both Windows and macOS.

React Native has several exceptional features, such as open-source, support for 3rd parties libraries, and even helps in using the same code on different platforms. No matter whether you want to develop web apps or hybrid apps, React Native is the best choice to develop iOS apps.

With the help of React Native, an Android emulator, and Mac OS deployment machines, you can build an iOS application on Windows PC. For checking the result, use the Expo simulator, which is available for both Android and iOS platforms.

Using Xamarin is a better choice when it comes to comparing it with Cloud Mac or other frameworks for hybrid app development. You get a cost-effective solution for iOS development on Windows.

Xamarin uses C# to code apps. Its features like native platform integration for Android and iOS and Google emulator manager helps to build, run and deploy them to an iOS device from Windows PC.

Want to validate your app idea? Share your mobile app idea. Our expert team of iOS developers has experience in developing over 2500 iOS apps.

Do you want to know which are the top IDEs for iOS and the cost to build iOS and Android apps? If yes, then read the FAQ section.

Which is the top integrated development environment for iOS?

Here are the best integrated development environments that you can use to develop an ios app.

How much does it cost to build iOS and Android apps?

The cost to build an iOS app and an Android app could range from $5000 – $1,00,000. However, this range depends on different factors, such as the type of app, number of the app’s screens, app complexity, features & functionality, design, and location of the app developers.

In this guide, we have shared the five best ways to develop iOS apps on Windows computers. Let the unavailability of a Mac OS not stop you from developing iOS apps.

These are the exact Xcodes alternatives that you are looking for. So, start to work on the iOS development process using any of the options.

These are the easiest options to develop iOS apps. In case you need further guidance or want to discuss your mobile app idea, contact our team of professional iOS app developers.

Let’s have a glimpse of the best iOS apps developed by our iOS team.

Get in touch with us through the ‘Contact Us’ form to start working on your app idea. One of our sales representatives will get back to you within 24 working hours.