TWITTER users mocked Jeff Bezos ahead of his maiden voyage to space as they compared his Blue Origin rocket to a giant penis.

The billionaire will blast himself and three others to the edge of space on Tuesday as he aims to soar more than 60 miles above Earth.

Social media users mocked Bezos ahead of his voyage on the Blue Origin spacecraftCredit: The Mega Agency

Some said the spacecraft looked like a penisCredit: Alamy

Ahead of the flight, Twitter users ridiculed Bezos as they compared his spacecraft to a penis.

One person said: “So everybody is making the comparison of Bezos’ Blue Origin Rocket to a penis.

“Does that mean we will see Bezos’ penis at lift-off?”

Another joked: “Can somebody please just admit that Jeff Bezos rocket needlessly looks like a penis #BlueOrigin (sic).”

The mogul and his brother Mark, 53, will be on the rocket’s first crewed flight – just 15 days after he stepped down as Amazon CEO.

The jibes come as fierce rival and Tesla CEO Elon Musk poked fun at the billionaire.

Musk posted a number of memes about Bezos and his space mission.

One mocked the fact that the launch will only reach an altitude of 62 miles.

The four-panel “Star Wars”-themed meme jokingly highlighted that Bezos is “going to space,” but not “orbital.” Musk simply replied: “Haha”.

Musk also responded to a tweet that referenced a conversation between the two space billionaires held over dinner in 2004.

The post began: “In 2004, Elon Musk and Jeff Bezos met for a meal to discuss space. It was one of their few in-person interactions.”

Referring to Bezos’ transformation from geek to muscle-bound mogul, Musk replied: “Now he can bench press a rhino.”

It was the latest shot fired in a 15-year feud between the two billionaires.

But, Musk did wish Bezos “luck” ahead of the maiden flight.

Amazon founder Bezos, who first created Blue Origin in 2000, has named the rocket after Alan Shepard, the first American in space.

Bezos, 57, who stepped down as Amazon’s CEO earlier this month, invited his 50-year-old brother Mark on board.

She trained to be an astronaut in the 1960s but was never given the chance to fly.

Funk will become the oldest person in space.

Meanwhile, Oliver Daemen will become the youngest person in space.

The teen is replacing the charity auction winner who spent $28 million for a ticket on the New Shepard spaceship.

The original ticket holder can no longer be on the Blue Origin New Shepard rocket “due to scheduling conflicts.”

Blue Origin has reportedly completed 15 test flights to space since 2015 and ticket sales are expected to be opened up after Bezos’ flight.

The aerospace company hasn’t disclosed the cost of a ride. The fourth seat on the upcoming flight was auctioned off for $28 million.

Passengers will take in views of the curvature of the planet before the pressurized capsule returns to earth under parachutes.

He flew 50 miles above the Earth’s surface on board the company’s VSS Unity spaceplane.

Bezos said on Monday: “What we’re hoping to do is build the road to space so future generations, maybe Oliver, and people of his generation will be able to do amazing things in space if we get good as reusable vehicles.

“The big thing Blue Origin is doing is making these vehicles reusable and in an operable way so that they can go over and over again, more like commercial airliners.

“If we can get to that stage, then the things the next generation will do – how to benefit Earth with everything in space – that will be amazing. That’s the real goal.” 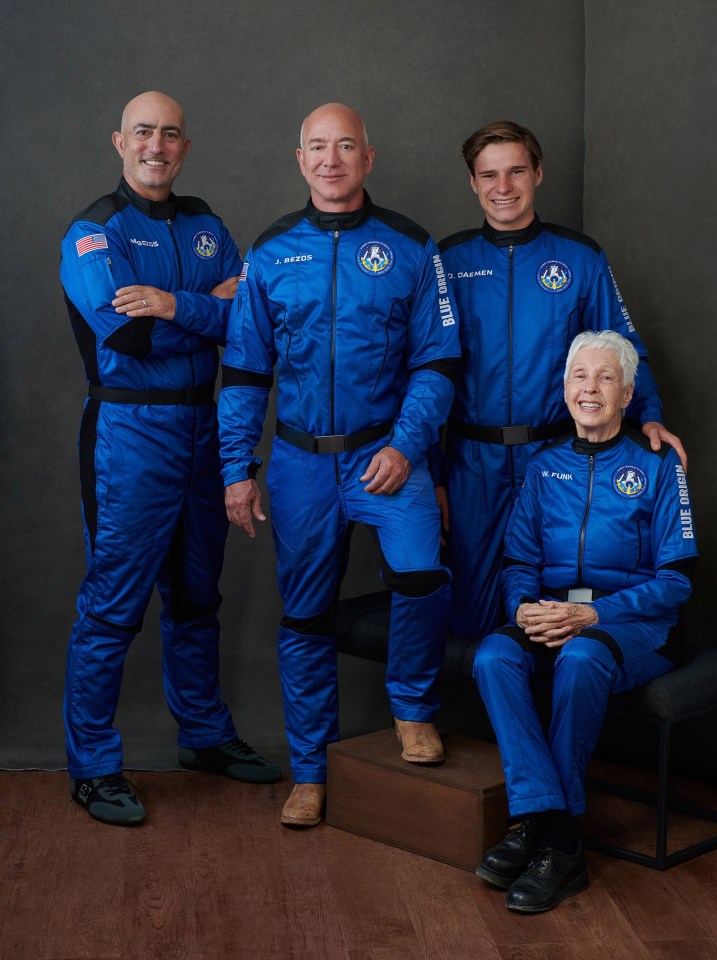 Bezos and his brother Mark will be jetting off into spaceCredit: Rex