It’s the return of the Royal London One Day Cup after the 2020 season was postponed by a year because of the coronavirus pandemic. The season will last a little bit less than a month and on the opening day itself, we have a umber of fixtures for your entertainment. In fact, most of them will be kicking off at the same time. If you want to read about Match 1 between Glamorgan and Warwickshire, you can click here.

Elsewhere in England in another venue is another opening day fixture at the 2021 Royal London One Day Cup. Here, we have crowd favourites Hampshire in action, albeit without a few players since England vs India is also happening alongside The Hundred. They’ll be taking on a familiar foe today in Essex. Keep reading for our complete BatBall11 (Code “READ123“) fantasy preview of the HAM vs ESS game…

Forfeiting an international career with South Africa, Kyle Abbott has been doing brilliantly in the county circuit here and it was 15 bowling innings ago that he last went wicketless across any format, so he’s a must pick in your HAM vs ESS fantasy team today. Captaining the side is James Vince who may not get the best scores when he plays for England but he’s a beast for Hampshire, getting 509 runs in just 7 games last season.

This team has a couple of all-rounder options which we simply can’t ignore. One of them is Liam Dawson who mostly contributed with the ball in the last season, ending as their second highest wicket taker but he can bat too, and is a good fantasy captain option. The internationals like de Grandhomme and D’Arcy Short can’t be ignored while another contributor all-rounder who will be good for your HAM vs ESS Dream11 team is Ian Holland.

The likes of Ryan ten Doeschat and Alastair Cook have been Essex legends over the years but we’re leaving them out of our BatBall11 (Code “READ123“) HAM vs ESS fantasy team because it’s been a while since they’ve contributed well. Instead, pick someone who had 3 centuries in only 5 games last season and that’s Varun Chopra. With the ball too, there’s plenty of experience in someone like Peter Siddle who had 12 scalps in 6 games last season.

Dan Lawrence was picked in the Test side to play India so he won’t be available but we could instead pick Tom Westley who had 370+ runs including 4 fifties in just 8 games in the 2019 Royal London One Day Cup, and has got 3 consecutive thirties coming into this game too. With the ball, there’s Dutch born Shane Snater who has been picking wickets regularly and is sure to be among the wickets here, if picked in the team. 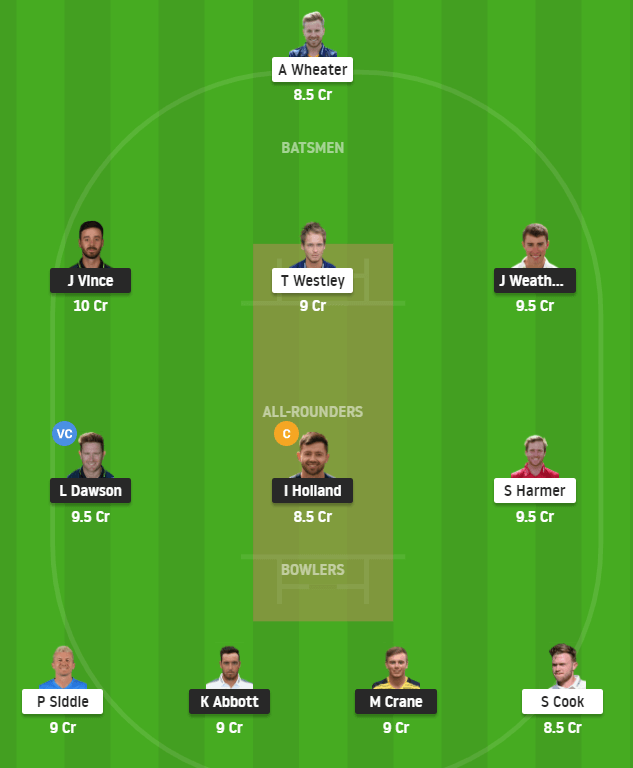