Crows have long been a symbol of death and transformation. So, it makes total sense that someone would decide to use the winged warriors as a harbinger of the end in gaming form. As the protagonist in Death’s Door, you play the part of the aforementioned bird, tasked with, “freeing” numerous souls for their eventual trip into the afterlife.

This feathery assassin spends his time bouncing back and forth between the game’s three core zones, and a centralized office area that is very reminiscent of the TVA in Disney’s recently released Loki series. The hub stage itself is presented with a monochrome flair that very much dips its proverbial toe into noir-inspired waters. The remaining trio of environments begin to introduce the use of color, not to mention every other mechanic under the sun, all while featuring the title’s trademark melancholy timbre.

Beauty, inside and out

If you’re looking at the key features that Death’s Door knocks out of the park, they fall into three main categories: combat, puzzles, and aesthetics. Without any one of those elements, the package has the potential to fall apart. Fortunately, not only did developer Acid Nerve nail all three, it blew them out of the goddamn water with a level of style and polish rarely encountered.

Who would’ve guessed that a game about freeing souls would be so heavy with combat? I guess that’s not too unusual. Regardless, every moment spent in combat is a genuine pleasure, thanks to the fluid and intensely responsive controls. One caveat to this conversation is that you’re going to be better off playing on a controller, due to the awkward aiming brought about by the use of a mouse and keyboard. As soon as you transition to the thumbsticks, the entire picture suddenly comes into focus.

Depending upon the weapon equipped, you will need to vary up your tactics. This is primarily due to the widely varying properties of each piece of your arsenal. Are you more of a brute-force tank, bringing the pain through slower, more concentrated blows? Or would you rather equip a pair of daggers and swiftly induce death by a thousand cuts? The choice is yours, as long as you’ve uncovered the weapons in question. Just stick to the primary storyline and most of these death-dealing objects will eventually appear in your path.

In a surprising act of restraint, virtually all of the puzzles in this 10-plus-hour adventure are organically presented, with very little commentary. It’s up to you to carefully examine each area to suss out what needs to be done to clear the room. Frequently, problem solving melds seamlessly with fending off waves of enemy combatants, because lord knows they can’t make it too easy on you. That said, there can be a substantial difference in challenge between puzzles encountered while in battle and those that are presented unencumbered. Just rest assured that you aren’t going to be finding any puzzles that will push your gray matter to its limits.

Death’s Door’s grim avatar also has magic powers that can fall into use for both combat and puzzle solving. For example, you could fire one of your magic arrows through a flame to light it ablaze or use it to light something else on fire. These can then be chained together to eventually light a torch that opens a previously locked door. On the other side of the coin, these abilities can also be used to hurt or manipulate adversaries. There may even be specific scenarios where mini-bosses are more susceptible to damage from one power over another, so be sure to pay close attention to how enemies respond to your enchanted offensive. 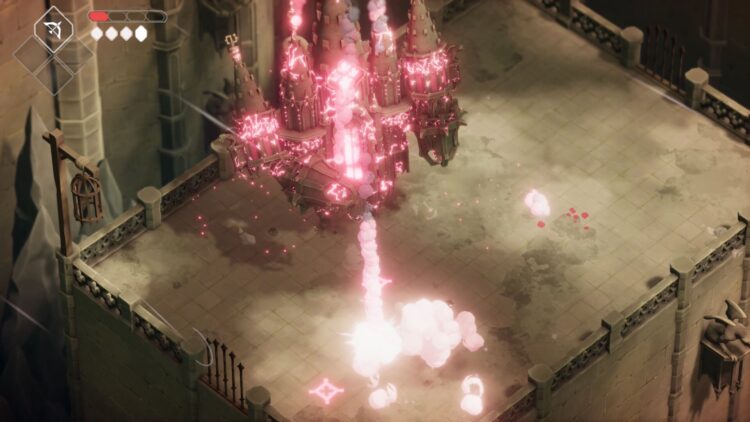 Probably the most influential aspect of Death’s Door’s design is its overall aesthetic. This is a game that has a very strong sense of style that permeates the entire presentation. Whether it be your amazingly animated attack sequences or the ancillary art strewn about the game’s world, there is a strong sense that a tremendous amount of thought and care has gone into the design. The sheer unnecessary amount of detail on display just helps drive this home even further.

All three main stages amounted to an extensive labyrinth of kill rooms and dungeons. Locations tended to loop back around on themselves after key goals were accomplished, only to make use of new abilities to unlock a previously inaccessible portion of the map. While this is a very gratifying way to slowly trickle new content to the player, it also prevents you from losing an excessive amount of progress due to an ill-advised death.

Considering that Death’s Door does so much right, it was somewhat unfortunate to realize a couple of rather substantial issues prevent this from breaking through the glass ceiling of top-tier action/adventures. For one, trying to determine what you need to do next to progress can tend to be unclear from time to time. Stages were expressly designed to funnel you along to the next key location, but that doesn’t necessarily guarantee that you will catch the hint. This issue was even further compounded when I attempted to return to the game roughly a day away. 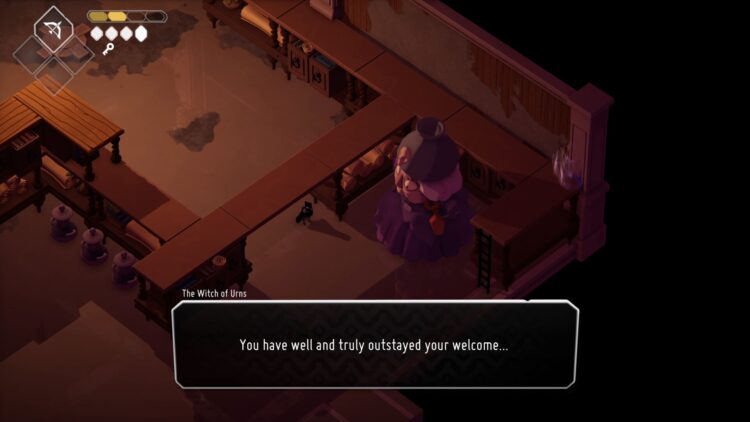 Not only did I have no idea where I was going, but there was also nothing in the UI to discern what was next on the agenda. I ended up fumbling around and inadvertently backtracking through half of the map before I realized I was going in the entirely wrong direction. Needless to say, it was infuriating that I needed to review my gameplay video from my last session to get back on the right track. Adding in a list of light objectives or checkpoint guides, indicating where to advance next, would’ve been a tremendously helpful to point you back to the right direction. If you wanted to take that one step further, the introduction of an in-game map would likely take care of the problem entirely.

Another unfortunate byproduct of dying frequently was the necessity to replay certain battle sequences or kill rooms numerous times. Most people will just dive into each of these battles, dispatching baddies right and left. However, when it’s your fourth or fifth time through an encounter, it becomes a bit easier to see the puppet strings. If there isn’t any sort of lock on the room, a vast majority of the combat isn’t even remotely necessary. As long as you know where to walk, most of these garden-variety skirmishes can be avoided entirely. In a game where fighting is so pivotal to the experience, simply allowing players to opt out entirely feels like a horrible waste for all parties involved.

Regardless, it’s hard to not fall in love with Death’s Door. The sheer attention to detail alone would be enough to guarantee success, so when you add in the sublime combat mechanics, interesting puzzles, and worlds teeming with content to explore, it’ll be hard to ignore. It may not be the masterpiece that I’ve seen some proclaiming from the mountain tops, but it’s still a genuinely great experience that shouldn’t be missed. Who knew that reaping souls could be so damn fun?